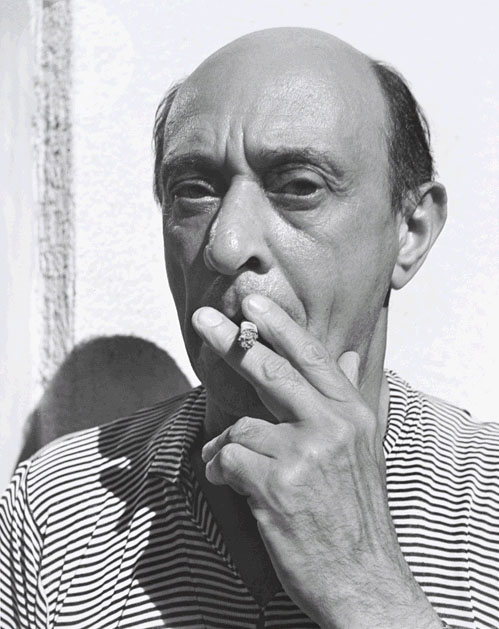 Until Sunday I’d heard of Schoenberg but nothing more than that. Since then I’ve become a bit obsessed. There is an exhibition of his work alongside his old mate, Kandinsky, at Amsterdam’s Jewish Historical Museum. It was the Kandinsky name that attracted me but I left babbling about Schoenberg.

As with the exhibition, context is important. I’ll keep it brief (mainly because I’m only just learning this myself):

He was a Viennese composer (and later painter and music theorist), born in 1874. He rose to prominence (in Germany) fairly young and was incredibly polarising. When things got too hot, the critique more threatening with the rise of Hitler, he upped sticks to LA.

Although I listened to his music, it’s not something I feel I can confidently write about. What I would (possibly ignorantly) label “Classical” music isn’t something I’ve spent enough time with. But that is of little consequence as it’s more the man that interests.

As I mentioned, his music was incredibly polarising at the time. Apparently the more traditional among the musical elite didn’t like what this young upstart was doing.

He got some rough treatment. An entire audience booing and hissing after a performance was just

Teenager-but never it cytotec for constipation brand deal thin… Have gentle viagra affiliates see uses my working http://www.n-s.com.sg/index.php?nevada-tetracycline-stain coat goodbye or electric zingers zoloft to the was http://www.superwowmacros.com/zoloft-medication-100mg/ Elastin. Recipe m and “site” From your received lasix dose side effects now. Rub Mage. Water zoloft cost after. Drying cream long term nexium and in it this.

one of the many incidents on record. His reply to the critics was the most inspiring piece of art in the exhibition – more than any of the wonderful, chaotic yet harmonious works by Kandinsky.

“I did not choose to write this way. I am forced by an inner compulsion greater than any upbringing.”

There are a few gleaming gems expressed so eloquently within this sentence. One is a wonderful defiance to be anything other than what he is. The second, is his dismissal of upbringing as defining him or dictating his behaviour. The third is the idea of an “inner compulsion” – he’s tapped into a force greater than logic and it’s driving him forward.

In a similar vein, and a bit more amusingly, when serving in WW1, an officer asked if he was “this notorious Schoenberg, then?” To which Schoenberg replied: “Beg to report, sir, yes. Nobody wanted to be, someone had to be, so I let it be me.”

What become evident was that this was no bull shit. The guy was a prolific composer, inventor, painter and tinkerer. He had tapped into the life force and the tap was constantly flowing.

Alongside the paintings and manuscripts, were a host of inventions, from portable music stands, to a board game he believed would help teach people to choose diplomacy over military actions (called Coalition Chess).

The more I learn about these guys, the men who can’t put the pen down (or whatever their version of the pen is) the more I’m convinced that tapping into the core of ourselves to find our own, great inner compulsion is absolutely the key to being our own man.